The panel said it “identified December 2007 as the peak month, after determining that the subsequent decline in economic activity was large enough to qualify as a recession.”

The NBER makes no forecast on how long a recession is predicted to last, but it said that in the past they have run from six to 18 months.

The US’s gross domestic product (GDP) did contract by 0.2 per cent at an annual rate in the fourth quarter of 2007.

However, that drop was followed by a 0.9 per cent rate of increase in the first quarter and a 2.8 per cent rise in the second quarter, when the economy was boosted by the distribution of millions of economic stimulus payments to US citizens made as part of the Bush administration’s plan to boost the US economy.

US stocks plunged at the end of trading on Monday, with the Dow Jones Industrial Index falling 679.95 points or 7.7 per cent to 8,149.09 points just after the closing bell – reportedly the fourth biggest point loss in its history.

The White House acknowledged the NBER report but did not refer to the US’s current economic crisis as a recession.

“But what’s important is what is being done about it. The most important things we can do for the economy right now are to return the financial and credit markets to normal, and to continue to make progress in housing, and that’s where we’ll continue to focus.”

The news comes as two new reports revealed further poor economic news for the US, with the US Commerce Department reporting on Monday that construction
spending fell by a larger-than-expected 1.2 per cent in October.

The US Institute for Supply Management also said US manufacturing activity
dropped to a 26-year low in November.

The US economy has been struggling with tight credit and the housing crisis and US Congress passed a $700 billion bailout package in October to prop up ailing US banks and rescue the ailing economy. 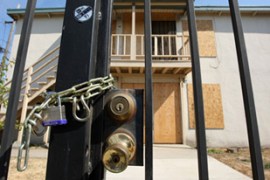 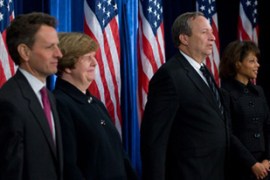