Preval said that structures throughout Haiti are also at risk of collapse due to poor construction and insufficent governance.

“It is not just schools, it is where people live, it is churches,” he said at the rescue scene.

Rescue workers, assisted by the International Red Cross, the Haitian Red Cross, and members of the UN Haiti peacekeeping force, used tools and their bare hands to dig through to children buried in the debris of the school in the hills above the capital.

Another woman screamed for her missing 12-year-old daughter. “I don’t know if she is dead or alive,” she said.

One boy whose legs were trapped by debris begged rescuers to cut his feet off, a firefighter said.

The aid group Doctors Without Borders said it had taken 85 injured adults and children from the school, half of them with life-threatening injuries.

France expressed its “deep emotion” for the victims and promised aid.

A new storey had been under construction atop the three-floor school when it fell in, also destroying or damaging five homes next to it.

“We are going to ask the minister of education to make an inspection of all the schools built in the same way,” he said.

About 500 students from primary through to high school ages attend the school in Petionville, but officials said they were unsure how many were inside at the time of the collapse.

The impoverished Caribbean nation, which lacks sophisticated rescue equipment, is continuing to struggle with the destruction wrought by four tropical storms and hurricanes that hit in quick succession this year, killing more than 800 people and destroying 60 per cent of the crop harvest. 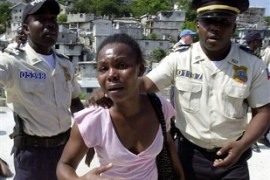 Death toll set to rise after children killed in school collapse in Port-au-Prince. 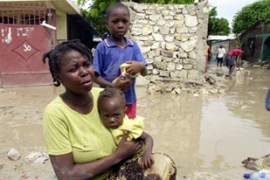 Police say almost 500 people have died in flooding in the port city of Gonaives. 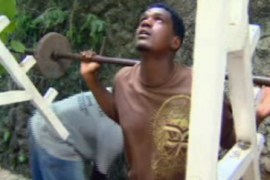 Haiti’s wealthy communities are creating a situation of haves and have-nots.