Anthony Green, a political analyst, told Al Jazeera: “It’s a fact which the main opposition leader John Key, a self-made millionaire financier is playing on [the flailing economy], promising a better economy. Latest polls show that his party is thirteen points ahead of Labour”.

“The weather in New Zealand tends to be more fickle than the politics, four seasons in one day is not an uncommon experience. But if the pundits and the pollsters are right New Zealand will vote for change and unlike America opt for the conservatives,” Green said.

But Clark was positive about her chances as she urged people to come out and vote.

“I’ve been out visiting very large headquarters for us, we have countless thousands of people mobilising Labour supporters out to the polling booths today, I’m feeling very good about it,” she told reporters.

Clark’s re-election hopes have been hit by an economic downturn that saw the country slip into recession in the first half of the year.

The country’s current recession has loomed large in the campaign with voters who are leaning toward Key, a former foreign currency trader and multi-millionaire.

Both Labour and National parties have promised tax cuts and extra spending, amid fears that the global credit crisis will hurt New Zealand still further.

A former anti-Vietnam war demonstrator, Clark took control of New Zealand’s centre-left Labour party in 1996. After decades of division, Clark united Labour and led them to a landslide election victory in 1999.

Clark has led her party to consecutive election victories in 2002 and 2005. If she wins on Saturday she will become New Zealand’s longest serving prime minister.

Since New Zealand introduced a proportional voting system in 1996, neither of the parties has secured an outright majority and they have always relied on the support of minor parties.

Under New Zealand’s mixed member proportional system, parties must secure either a local electorate seat, or five per cent of the nationwide vote, to enter the 120-seat parliament.

The National party may have to seek the backing of the Maori party, which is expected to retain its four seats in the 120-seat parliament.

The Maori party, which represents New Zealand’s indigenous Maori people who make up 15 per cent of the population, has said it could work with either Labour or National.

The latest polls show National, United Future and Act with 62 to 64 seats, compared with 54 for Labour, the Greens and the Progressives.

Key has attempted to take advantage on the mood of change seen in the US, citing Barack Obama’s victory in the presidential election as a mandate for new approaches to address the global financial crisis.

Over the last three elections in New Zealand, voter turnout has averaged 80.9 per cent. 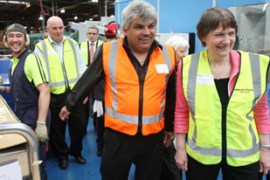