A Nato spokesman said that the military alliance is concerned at Moscow’s missile deployment plan.

“We have seen the press reports on the statement of President Medvedev regarding deployment of Iskander missiles to the Kaliningrad region,” Robert Pszczel said.

“If confirmed, it would raise serious worries concerning the conformity with existing arms control arrangements which are important for European security.

“Moreover, placing of these Iskander missiles in the Kaliningrad region would not help Nato and Russia to improve their relationship.”

During his address on Wednesday, Medvedev also blamed the US for the war in Georgia and the global financial crisis.

He said he hoped Barack Obama would act to improve relations with Russia but he did not offer congratulations to the president-elect.

Medvedev singled out the United States for criticism, casting Russia’s war with Georgia in August and the global financial turmoil as consequences of aggressive, selfish US policies.

“Mechanisms must be created to block mistaken, egoistical and sometimes simply dangerous decisions of certain members of the international community,” he said shortly after starting the 85-minute speech in the Kremlin.

Medvedev, whose criticism of Washington echoed addresses by his predecessor Vladimir Putin, made it clear he was referring to the US.

Georgia sparked the August war on its territory with what he called “barbaric aggression” against the breakaway region of South Ossetia, which is backed by Moscow.

The conflict “was, among other things, the result of the arrogant course of the American administration, which did not tolerate criticism and preferred unilateral decisions,” he said.

Medvedev painted Russia as a country threatened by growing Western
military might.

“From what we have seen in recent years, the creation of a missile defense system, the encirclement of Russia with military bases, the relentless expansion of Nato, we have gotten the strong impression that they are testing our strength,” Medvedev said.

He announced the deployment of the Iskander missiles as a military response to US plans to deploy missile-defense facilities in Poland and the Czech Republic, former Soviet satellites that are now Nato members.

Speaking just hours after Barack Obama was declared the victor in the US presidential election, Medvedev said he hoped the incoming administration will take steps to improve badly damaged US ties with Russia.

He suggested it is up to the US, not the Kremlin, to seek to improve relations.

“I stress that we have no problem with the American people, no inborn anti-Americanism. And we hope that our partners, the US administration, will make a choice in favor of full-fledged relations with Russia,” Medvedev said.

Russian-American relations have been increasingly tense and were driven to a post-Cold War low by Moscow’s war with US ally Georgia. 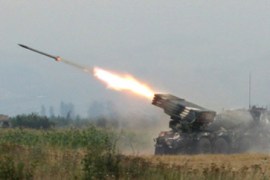 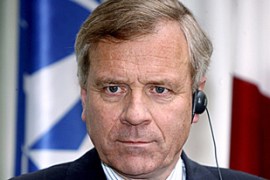 Secretary-general in Tbilisi as Russia warns West against imposing sanctions on Moscow. 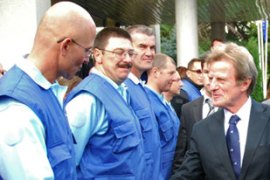