But Obama also struck a cautionary note, saying there was still much to be done.

“Even as we celebrate tonight, we know the challenges that tomorrow will bring are the greatest of our lifetime – two wars, a planet in peril [and] the worst financial crisis in a century,’ he said.

McCain had conceded defeat in a telephone conversation with Obama late on Tuesday.

Al Jazeera’s Rob Reynolds, reporting from Chicago, said: “It is over fairly early, not like the past two elections. This one was a more decisive victory.

“This was a bitter campaign, it was divisive. There were sometimes ugly shouts at McCain’s rallies. There will need to be a healing process.  President-elect Obama will have to begin that process.”

The Obama supporters cheered, hugged and cried as the historic victory was announced.

“As soon as the breaking news graphic appeared on the screen, this crowd knew what it was,” Al Jazeera’s Sarah Brown, reporting from the rally, said.

Shortly after speaking to Obama, McCain thanked supporters for their efforts during the long campaign.

“This is an historic election, and I recognise the significance this has for African Americans, and the pride they must have tonight,” he told a rally in Phoenix, Arizona.

“It’s natural tonight to feel some disappointment but tomorrow we must move beyond that and work together to get our country moving again. We fought as hard as we could and although we fell short the failure is mine, not yours.”

As the election result was announced, thousands of people gathered outside the White House to celebrate Obama’s win, Al Jazeera’s Alan Fisher reported.

Obama’s race for the White House began to turn decisively in his favour after he won the key battleground state of Ohio. The result was a blow to McCain, as no Republican candidate has managed to gain the presidency without winning the state.

“McCain put his lifeblood into this state, fought county by county, city by city. He really focused on here, he knew he had to, no Republican has ever been elected president without winning Ohio,” John Nichols, Washington correspondent for The Nation newspaper, told Al Jazeera

According to US media projections, Obama took at least seven states that were won by George Bush, the current president, at his re-election in 2004.

On Wednesday, Bush congratulated Obama and pledged to ease the president-elect’s  move into the White House.

“Last night, I had a warm conversation with president-elect Barack Obama. I congratulated him and Senator [Joe] Biden on their impressive victory,” Bush said.

The Democratic candidate’s victory marks the pinnacle of four centuries of striving for equal rights for African-Americans in the country.

“Our children walk into a very different America tomorrow,” he told Al Jazeera.

“For some people it is the end of a two-year campaign and for others it has been a 200-year trek … The civil rights movement, among others, have made this moment possible.” 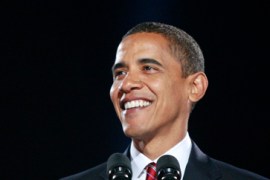 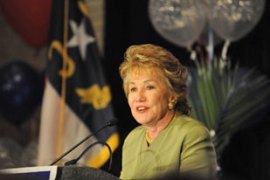 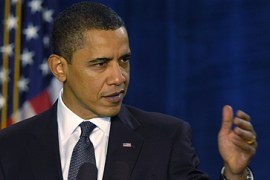 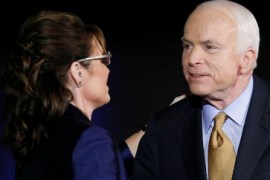