In Vietnam the government has warned that more downpours, flash floods and landslides could be in store in mountainous provinces in the country’s north-central region this week.

Vietnam, the world’s third-largest rice exporter, has not released any crop damage estimates in the northern Red River delta region, but the government said nearly 260,000 hectares of rice, corn, sugarcane and fruit had been submerged.

In the capital, Hanoi, schools stayed closed and many streets were still submerged on Tuesday.

Officials say at least 20 people have died in the city’s worst flooding in more than 20 years.

“This natural disaster is characterised as the largest ever in Hanoi,” Pham Quang Nghi, the chief of the Hanoi branch of the ruling Communist Party, was quoted by state media as saying at a meeting on Monday.

The national weather centre has also forecast more heavy rains over the weekend that could lead to higher water levels in the already-swollen Thai Binh river in the northern delta region.

Health ministry officials meanwhile have alerted clinics in flood-hit areas to prepare for disease outbreaks such as cholera or dengue as parts of Hanoi and 17 other provinces struggled with a shortage of fresh water and food.

State-run Voice of Vietnam radio said emergency supplies of instant noodles and rice were being distributed to flood victims in and around the capital. 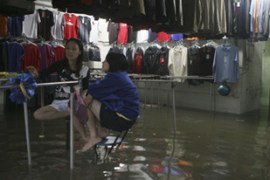 Hanoi grinds to a halt after worst floods in more than 20 years.