The board’s findings run contrary to a legislative inquiry conducted in October that found Palin had abused her position by pressuring subordinates to fire the trooper.

Palin brought the matter to the board herself after complaining the legislative investigation was led by rival Democrats and biased.

Timothy Petumenos, independent legal adviser to the board, said the original inquiry had not interpreted the ethics legislation properly.

“The Ethics Act is primarily directed at personal financial benefit … people have a lot of misconceptions about the scope of the Alaska Ethics Act,” he said.

Petumenos also said Palin and other officials had denied allegations made by Monegan which, he claimed, formed the basis of much of the legislative report.

Thomas Van Flein, a lawyer acting for Palin and her husband Todd, said: “Mr Petumenos determined that the Branchflower report’s findings that Govenor Palin abused her power had no legal basis and that Governor Palin did not violate the Ethics Act.” 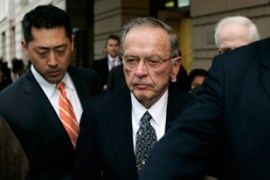