The five-day visit by Chen, China’s most senior official to the island since the two sides split amid the bloody civil war in 1949, sparked anger and widespread protests in Taipei.

Chen’s visit follows efforts by Ma Ying-jeou since he became Taiwan’s president in May to improve ties with Beijing and end decades of political rivalry.

But Taiwan’s main opposition Democratic Progressive party, which favours formal independence from China, has accused the president of undermining the island’s sovereignty in its efforts to move closer to China.

“We are concerned that Taiwan is gradually losing out its sovereignty after the interactions with China,” Tsai Ing-wen, the party’s chairwoman, said.

China has long regarded Taiwan as a renegade province to be reunited, by force if necessary.

A key feature of the talks has been to expand the limited number of direct flights between Taiwan and mainland China, and to allow direct shipping links across the Taiwan Strait for the first time in 60 years.

Taiwan banned direct flights for security reasons after the communists won the Chinese civil war and took over the mainland but millions of Taiwanese tourists and business people travel to China each year, first transiting in other countries.

In June the two sides agreed on a daily quota of 3,000 Chinese tourists to Taiwan, but China still restricts travel to the island.

Past negotiations have been stymied by disputes over what the new air routes would be called. China wants to call the routes “domestic”, while the Taiwanese prefer using “international”.

In opening the talks, Chen had said the dialogue “will promote civil exchanges, economic co-operation to enhance the welfare of the people on both sides”.

“We will make our best efforts to satisfy the needs of the Taiwanese people on a mutually beneficial basis.

Local and foreign business groups welcomed the talks saying restrictions on flights and shipping have kept Taiwan from fully participating in the global and Asian economies.

“Taiwan can only benefit from having greater interaction with one of the world’s fastest-growing markets,” the groups representing the US, Japan and Europe said in a joint statement.

The next round of talks is expected to focus on financial co-operation and on signing a memorandum of understanding allowing banks to set up branches on each side. 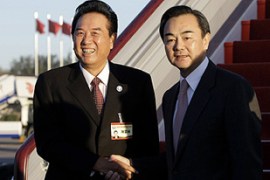