Murtala Sani Hashim, who has been registering the dead as they are brought to the mosque, told the Reuters news agency he had listed 367 bodies and more were arriving.

A doctor at one of the city’s main hospitals said he had received 25 corpses and 154 injured since the unrest began.

But officials said that only 200 people had been killed in the clashes.

“Official figures released by the police so far indicate that about 200 people are dead,” Nuhu Gagara, the Plateau State information minister, said.

“This figure is just preliminary, as a search and rescue committee has been inaugurated by the government to go around the city and recover dead bodies.”

Gagara said that police had arrested 500 people on Saturday alone carrying “all sorts of lethal weapons”.

Homes, churches and mosques were burnt down in the rioting, fuelled by rumours that the All Nigerian Peoples Party (ANPP) had lost the elections to the ruling People’s Democratic Party (PDP).

The ANPP is considered a predominantly Muslim party, while the PDP is mainly Christian. The city of Jos itself sits between Nigeria’s Muslim north and Christian south.

“The PDP provided an all-Christian ticket. They started the trouble because they couldn’t win,” Samaila Abdullahi Mohammed, a spokesman for the imam at the main mosque, said.

He accused the security forces of heavy-handed tactics, saying: “As far as we are concerned, we have stopped the violence, but the police have not.”

The Red Cross said around 7,000 people had fled their homes and were sheltering in government buildings, an army barracks and religious centres.

Nigeria’s 140 million people are roughly equally split between Muslims and Christians. Displaced people from both religions sheltered together in impromptu camps around Jos.

Jos, the administrative capital of Nigeria’s Plateau state, was the scene of a week of violence between Christians and Muslims in September 2001.

The violence is the worst since Umaru Yar Adua’s inauguration as Nigeria’s president in May 2007. 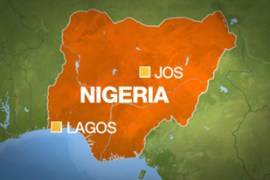