“It is creating a credibility gap.”

However, Zardari told the ‘Talk to Al Jazeera’ television programme that some of the US drone attacks on his country’s soil could be “excused” as the mountainous Afghan-Pakistani border was often difficult to discern.

“If a drone comes in and targets a particular place, even the map doesn’t [always] know if it’s in Afghanistan or Pakistan,” he said.

US forces or intelligence agents are suspected of carrying out at least 17 missile attacks in Pakistan since August. Pakistan has condemned them as violations of the country’s sovereignty, but the raids have continued.

Zardari also defended his country’s co-operation with US forces operating in the region.

“There is a UN resolution on Afghanistan and, on any side of the border, there needs to be interaction so we interact with the Americans.”

In a sign of the challenge facing Pakistani and US forces along the border with Afghanistan, just hours before his arrival on Sunday, eight Pakistani paramilitary soldiers were killed in a blast in South Waziristan.

The suicide attack at a Frontier Corps checkpoint in Zalai came after two targets in Pakistan were hit by suspected US missiles on Friday.

At least 12 suspected fighters were killed by two missiles fired by a suspected US drone near Wana.

Pakistan has deployed security forces throughout the northwest of the country in an attempt to combat fighters sympathetic to the Taliban and al-Qaeda, which Washington says are crossing the porous border to attack US and Nato-led troops in Afghanistan.

Petraeus is accompanied by Richard Boucher, the US assistant secretary of state, on the visit.

“They are here for previously scheduled meetings with government and military officials,” Lou Fintor, US embassy spokesman, said.

Petraeus, previously the senior US commander in Baghdad, has indicated support for efforts to reach out to members of the Taliban considered moderate enough to co-operate with the Afghan government. 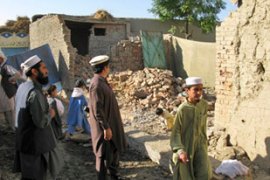 Reports suggest two wanted fighters were among those killed in suspected US raids.