The secretary-general also urged leaders not to focus on the global economic crisis at the expense of key development targets – including provision of aid to combat rising food and fuel prices, supporting green technologies to battle climate change and create jobs and embracing a “new multilaterism” that would give emerging and developing economies more influence within key global finance institutions.

“If we focus only on the financial crisis we will find no solutions at all. A cascading series of crises will fall upon us. I have been stressing to world leaders that we need to think big …. just look at the trillions of dollars found to save the banks and companies.

“We need to pool all resources possible to help those who are the poorest of the poor, the most vulnerable of countries,” he said.

Earlier on Friday, Miguel d’Escoto Brockmann, president of the UN General Assembly, delivered a scathing attack on some member states apparent unwillingness to move away from free-market dominated development solutions, commit to aid level targets such as donating 0.7 per cent of gross national income and “put the human at the heart of development”.

“It is not a question of regulation or deregulation. There are alternatives … we have become a moral basket case. We know what needs to be done but we don’t seem to be able to come up with the energy to do it.

“Why is that? Because we have become contaminated by the logic of the predominant culture that puts profit at the centre of the development process instead of human beings.”

Despite this, he said he was still “hopeful” of a positive outcome in terms of fulfilling and building on the development pledges made at Monterrey, Mexico in 2002.

Sources close to the negotiations – which centre on a number of key development goals and principles – said there was much debate about whether the entire focus of the development agenda should be changed in light of the current economic crisis.

Both Ban Ki-moon’s and Brockmann’s comments follow sharp criticism from leading charities and aid agencies about heads of state of key economies choosing to stay away from Doha. 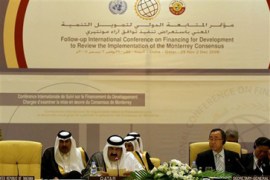 A guide to the Doha UN summit

Participants will review progress made since the 2002 Monterrey Consensus. 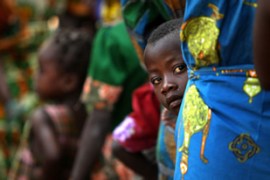 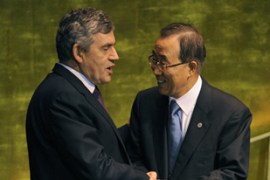