Brooke Anderson, the chief national security spokesman for Barack Obama, the US president-elect, said the attacks “demonstrate the grave and urgent threat of terrorism”.

“The United States must continue to strengthen our partnerships with India and nations around the world to root out and destroy terrorist networks,” he said.

Gordon Brown, the British prime minister, said he had sent Manmohan Singh, India’s prime minister, a message assuring him that “the UK stands solidly with his government as they respond, and to offer all necessary help”.

“These outrageous attacks in Mumbai will be met with a vigorous  response,” he said.

The US and Britain said they had no reports of casualties among their citizens but Japan reported one of its nationals had been killed and another hurt, while two Australians and a European parliament employee were also injured.

The French presidency of the European Union said it had learnt of the attacks “with horror and indignation” and “condemns them in the strongest possible terms”.

It said the EU “shares in the mourning of the Indian nation and stands by its side during this dramatic test”. 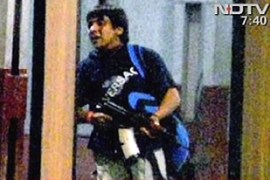 At least 80 reported dead after men armed with guns and grenades strike across Indian city.