The WWF, Greenpeace, who called the decision “disastrous and shameful”, and other environmental groups want a complete moratorium on the fishing of bluefin tuna, which is an endangered species.

Speaking to Al Jazeera, Willie Mackenzie, oceans campaigner for Greenpeace, said that ultimately the continued quotas could lead to the extinction of the fish in the long term.

Sebastian Losada, of Greenpeace Spain, said: “Iccat has missed its last chance to save the bluefin tuna from stock collapse.”

Iccat brings together 46 major fishing nations, ranging from Japan to the United States and Norway, and sets quota for the fishing of bluefin tuna in the Mediterranean and the Atlantic.

Fabio Hazin, the organisation’s chairman, said that the decision on Tuesday was the best outcome to be hoped for.

Hazin said: “The result may not be perfect, is certainly not perfect, but it was the best result possible in such a complicated meeting and I am very confident and hopefu that the decisions we made here will help to ensure the sustainability of the tuna stocks we have demanded to manage.”

He said that the new total allowable catch of 22,000 tonnes was set taking into account the needs of fishermen.

“At the same time, this will not cause excessive hardship for the fishermen who make use of the stock,” he said.

Sergi Tudela, the head of the WWF’s Mediterranean fisheries programme, said: “This is not a decision, it is a disgrace which leaves WWF little choice but to look elsewhere to save this fishery from itself.”

The special Icaat meeting in Morocco was called to assess the threat to bluefin tuna and propose protection measures.

The WWF said that the European Union (EU) was the main backer of the new quota, with the support of Japan, Morocco, Algeria, Tunisia, Egypt and Syria.

It said Japan had initially followed the United States, Canada, Mexico, Norway, Iceland and Brazil in supporting a limit of 15,000 tonnes.

The WWF and Greenpeace said that the EU had put pressure on smaller nations to back the higher catch quota.

In a statement, Greenpeace said: “The European Union, representing the majority of Mediterranean countries with interests in the bluefin tuna fishery, has bullied other parties in the meeting into agreeing to management proposals which completely fail to follow the advice of Icaat’s own scientific body to substantially reduce fishing and protect the species’ spawning grounds.”

The European Mediterranean tuna fishermen’s association, which represents 2,500 professionals in France, Italy and Malta, opposes any moratorium but says it wants tougher checks on the fishing of bluefin tuna. 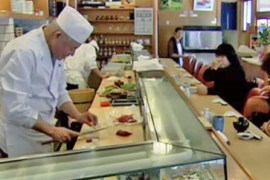 But with global stocks decimated and illegal fishing rife will it be off the menu?