The statement said prosecutors had opened a murder investigation.

Vladikavkaz is the capital of North Ossetia, a mainly Christian region which has seen a wave of violence that began with a separatist movement in nearby Chechnya in the 1990s and has since spread to neighbouring regions.

Twelve people were killed on November 6 when a suspected suicide bomber attacked a minibus as it pulled up outside a Vladikavkaz market.

Dmitry Medvedev, the Russian president, said the bombing showed the country still faced a terrorist threat and that security forces could not afford to drop their guard.

The town of Beslan, scene of a school siege in 2004 in which more than 300 people were killed, is in North Ossetia.

North Ossetia has volatile relations with the neighbouring region of Ingushetia that stem from an outbreak of sectarian violence in 1992 in which hundreds of people were killed.

Prosecutors said the bus bombing may be linked to that conflict.

The province lies just across the border from Georgia’s breakaway South Ossetia region, which was the focus of a brief war between Moscow and Tbilisi in August. 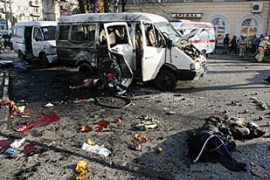 Explosive device goes off as minibus passes through capital of Russian region.