Helicopters, some provided by the government and others donated by businesses, have rescued more than 1,000 people, but the authorities say more needs to be done.

“The cities in the south still cannot be reached, it’s going to take some time.”

In the cities of Blumenau and Itajai, among the worst hit by the floods, people ransacked supermarkets and grocery stores in search of food, local officials said.

The spread of disease was now a major concern, said de Mello.

“Sewage water spilled into the streets and with people homeless and walking barefoot, it’s a big concern,” he said.

Jose Temporao, the minister of health, travelled to the region to help co-ordinate rescue efforts and announced the shipment of 17 tonnes of medical supplies, including antidotes for snake bites. 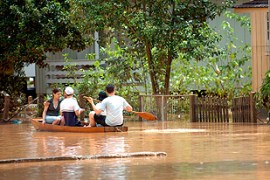 Scores killed and thousands in need of shelter and drinking water. 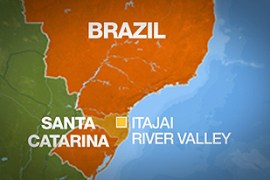