“We will see if the people use this right, and if all the country approves it or not, if there is a referendum.”

He is barred from making another attempt at changing the law, but his supporters could make a petition for a new referendum instead.

“I’ve said I’m not going to introduce or ask for any constitutional reform regarding presidential re-election,” he said.

“What I can’t avoid is if someone else does it.”

A change in the law could see Chavez break the current two-term limit for presidents and re-run for office in 2012.

Chavez first took power nearly 10 years ago. His second six-year term is set to expire in 2013.

His support has recovered since losing the 2007 referendum that would have allowed him to handpick local leaders and shelve civil liberties under extended states of emergency, as well as permit him to seek re-election indefinitely.

Chavez is promising to accelerate his “Bolivarian socialist project”, purported as a progressive construction of state power during the succeeding years of his presidency. 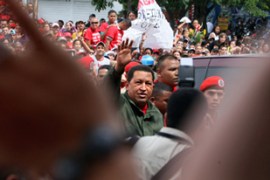