He said that a political solution included “starting to talk to Taliban and those opposing the government”.

But the president’s critics have questioned the timing of his most recent demand, pointing out that Karzai is due to stand for re-election next year.

“This statement sounds so hollow so close to the election,” Daoud Sultanzoy, an indpendent member of parliament in Afghanistan, told Al Jazeera.

“Everybody in this country knows that Mr Karzai has in the past few days and weeks been releasing all kinds of statments – and that seems like suspect timing so close to the election.”

A US-led invasion ousted the Taliban from power in Afghanistan in 2001 and nearly 70,000 mainly Western troops, most of them under a UN Security Council mandate, have since been sent to Afghanistan.

Barack Obama, the US president-elect, has said that Afghanistan and his country’s so-called “war on terror” would be a priority for his government and campaigned on a pledge to shift US forces from Iraq to Afghanistan.

Karzai has been pushing for talks with insurgents who renounce links with al-Qaeda and accept the post-Taliban constitution.

A statement released after the meeting said he had told the 15 UN ambassadors and representatives that Afghans were “not hopeful for the future” because of the poor security situation.

“The president emphasised that Afghanistan is committed to the war against al-Qaeda and those Taliban who take orders from outside,” it said, referring to extremist bases across the border in Pakistan.

“But we will talk with those Taliban who for various reasons have joined the opposition and are not against the Afghan constitution,” the statement said.

Karzai also said it was unacceptable that the Taliban controlled a number of districts in Afghanistan, including some in provinces with large numbers of foreign soldiers.

“We need to ensure the Afghan government is in control of its entire territory,” Hamidzada said. “Having pockets of territory mainly in southern Afghanistan and Helmand under Taliban control is unacceptable.”

Karzai also repeated his demands that the international forces stop causing civilian casualties in their operations against fighters and focus their efforts on al-Qaeda and Taliban bases in Pakistan, his spokesman said.

The delegation, which included Zalmay Khalilzad, the US ambassador to the UN, are on a fact-finding mission to Afghanistan.

The US military also said on Tuesday it had killed six fighters and detained 12 people in operations a day earlier. 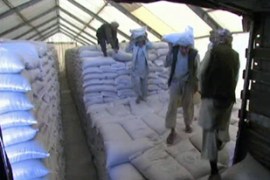 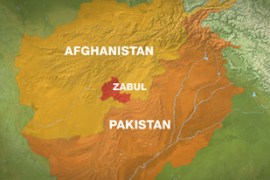 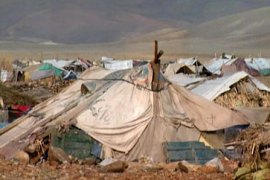 Afghan refugees are under pressure from their host countries to return home.