Thirty-one years after Germany’s federal prosecutor, Siegfried Buback, was gunned down by two men on a passing motorbike, his son Michael still does not know who was responsible for the murder. And now, the man who holds the key is about to be released from jail.

He will walk free in January after serving 26 years in prison for a spate of murders, kidnappings and hijackings during the bloody ”German Autumn” of the late 1970s, when the RAF – also known as the Baader Meinhof gang – terrorised West Germany.

Within hours of the court’s decision, angry denouncements were flying around, in a sign that the parole decision is set to open up old wounds in Germany.

Juergen Vietor, co-pilot of the Lufthansa plane the RAF hijacked in October 1977, vowed to hand back his Order of Merit of The Federal Republic of Germany, according to Bild newspaper, describing the parole as a mockery to victims, their friends and families.

Sabine Reichel, the daughter of Buback’s murdered driver Georg Wurster, said: ”We suffer further and the culprit is released for life. It would be good to hear nothing more of it.”

Victims’ families are particularly incensed that Klar has never expressed remorse for the crimes, nor co-operated with authorities to help them piece together precisely how the crimes were committed.

But Michael Buback, who is an eminent chemist at Goetingen University, wants only to know exactly what role Klar played in his father’s murder.

Because of the difficulty of unravelling the complex structure of the RAF and how it carried out specific crimes, prosecutors back then simply charged Klar and others with a role in all crimes committed by the RAF since 1977.

”The remorse I’m looking for is that he discloses details of what he did,” Buback told Al Jazeera.

”For years, I have worked on finding out, but still today it’s not clear what he did. It is known he was not on the motorbike. Perhaps he was the driver who waited nearby. We just don’t know and if we did know, we’d have some kind of resolution.”

Buback’s killing kicked off a spate of murders including those of Dresdner Bank chairman Jurgen Ponto and industrialist Hanns-Martin Schleyer. Klar was an RAF leader at that time. Only one other member, Birgit Hogefeld, remains in jail.

Klar and Hogefeld applied to German president Horst Koehler last year for a pardon, but their pleas were rejected. Koehler didn’t state his reasons, but analysts say Klar dashed his chances when he sent a statement to the Rosa Luxemburg Convention of left-wing groups calling for the destruction of capitalism.

”He never regretted anything,” said Henryk Broder, a journalist with Der Spiegel who has covered the case. ”He was a professional murderer who disguised himself as a professional revolutionary. Now he will become a cult figure of the couch potato leftist.”

Similar pronouncements were made about the recent film The Baader Meinhof Complex, which was slammed by some critics as catering to a ”terrorist chic”.

The furious debate underlined the raw nerves that the group still touches in Germany. But the reality is more complex than conservatives’ assumption that Klar will be given a hero’s return when he leaves jail.

Ulla Jelpke, spokeswomen for home affairs of the Left Party – a rising power in German politics – told Al Jazeera: ”I appreciate the release of Christian Klar. This release was overdue. I wish him the best for his life in freedom.”

But the left is far from unified on how it remembers its violent practitioners of the 1970s. Ramona Hering of the socialist Rosa Luxemburg Foundation said the fact that Klar had never shown any political justification for his crimes meant that he could hardly be admired as a political prisoner.

”The left has no sympathy for murderers,” she said.

In deciding to grant Klar parole, the court stated that he no longer posed a threat to society – a view backed by counter-terrorism expert Rolf Tophoven from the Institute for Terrorism Research & Security Policy.

It is likely that Klar would find himself in a political wilderness, in a landscape he hardly recognises, Tophoven said.

Left wing extremists today come mostly from the anti-globalisation movement and lack the organisation or violent impulses of the 1970s’ radicals, he said.

Klar is unlikely to become a figurehead because he lacks the celebrity status of Andreas Baader and Ulrike Meinhof, the group’s founders.

”I don’t think he is a threat any more. Klar is a terrorist from yesterday and he is not in the consciousness of young German people.”

He pointed to the example of Brigitte Mohnhaupt, who led the RAF with Klar after the group’s original leaders committed suicide in jail.

She was released from prison in March last year after serving 24 years for her role in nine murders. After a flurry of attention, she disappeared from the public eye and was forgotten.

David Wroe is a freelance journalist working out of Berlin. 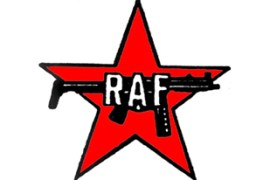