“They are very discreet about money and the direction of investment, but they are looking for world-class pieces,” an official from the newly created Qatar Museums Authority (QMA) told the UK’s The Economist magazine.

Oliver Watson, a former senior curator of the Victoria and Albert Museum in London who advised on the project, told the UK’s Financial Times: “This collection is not as big in comparison with the Louvre or the Metropolitan, but the quality is astonishing. It can match the best collections anywhere.”

Built on a man-made island, the 382,000-square-foot Museum of Islamic Art is dedicated to research into Islamic art, learning and creativity.

The museum is exhibiting an art collection dating from the eighth century to the 19th from across the Islamic world and countries that have been influenced by Islamic artistic trends, such as India and Spain.

The museum has at least 4,500 objects but only about 850 will be on display at any one time.

Arab envoys in Qatar say the museum will play an important role in deepening the relationship between the East and West. 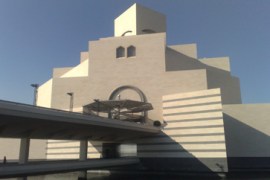 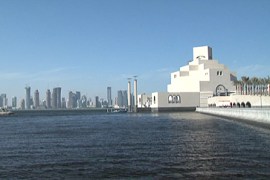 The largest collection of Islamic art in the world has gone on display in Qatar.