Bush’s comments came three weeks after Alan Greenspan, the former chairman of the US Federal Reserve who served under the Bush administration, admitted to a US house committee on the financial crisis that he had “found a flaw … in the model that I perceived is the critical functioning structure that defines how the world works” – referring to the basis of the free-market school of thought.

Referring to the Chicago School of Economics, which ideologically underpinned the Bush economic agenda and shaped world markets for decades, Gerald Friedman, the professor of economics at the University of Massachusetts at Amherst, told Al Jazeera: “There is a lot of anger towards the Chicago school and the people on Wall Street feel betrayed.

“Deregulation has been a complete disaster for them.”

“I think [the Chicago School] changed the direction of economics, but it’s over now and completely discredited.”

Bush also pledged to push ahead with the Doha world trade talks – a long-frustrated attempt to forge a global free trade market – before he leaves office.

“I recognise that I’m leaving office in two months but, nevertheless, this administration will push hard to put the modalities in place so that Doha can be completed and so we send a message we refuse to accept protectionism in the 21st century,” he said.

He underlined that the Group of 20 key strategic economies had, at last week’s Washington-hosted summit, “expressed solidarity with the idea of completing Doha, and now we’ve go to put those words into action”.

Bush also acknowledged the world economic order was rapidly reshaping itself and said the US backed plans for developing nations to take a greater role in global institutions such as the World Bank and the International Monetary Fund.

He said: “We’re witnessing a dramatic shift of history as the centre of the world’s economic stage moves from west to east, from the Atlantic to the Pacific. Some view the rise of the Asia pacific with suspicion and fear. America doesn’t.”

World leaders are meeting in the Peruvian capital Lima for a two-day Asia-Pacific Economic Co-operation (Apec) forum on the global economic downturn.

Bush, on his last scheduled foreign trip as US president, also met Hu Jintao, the Chinese president, in Lima on Friday ahead of the summit for discussions on how to advance talks with North Korea.

The Apec gathering of 21 countries, which account for nearly half of the world’s trade, “is an important meeting this time, particularly given the financial situation in the world,” Bush said in an earlier interview with Peru’s America TV channel on Friday.

The summit is expected to ratify previous commitments by the G20 group of world economies to use trade and government spending to combat the economic crisis. 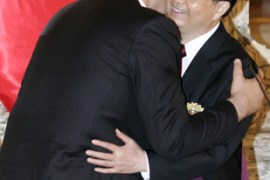