Organisers placed an effigy of George Bush, the US president, holding a sign that said “the security agreement … shame and humiliation” on a pedestal near a sculpture that replaced the Saddam statue.

After prayers were held, demonstrators pelted the effigy with plastic water bottles and sandles.

Security was tight for the event, with heavily armed soldiers closing the area to traffic and army snipers on building overlooking the square.

Al-Sadr has led objections to the security deal, which will be voted on by parliament on Monday, saying is another instance of Iraq surrendering to US interests.

“Let the government know that America is, and will not be, of any use to us because it is the enemy of Islam,” al-Sadr said in a sermon read by Sheikh Abdul-Hadi al-Mohammadawi, his representative.

“The government must know that it is the people who help it in the good and the bad times. If it throws the occupier out, all the Iraqi people will stand by it.”

The crowd responded to the reading with chants of “Yes, yes to Muqtada!” and “No, no to America!”

The pact has the support of the ruling coalition but al-Sadr’s followers oppose any deal with the US forces and many Sunni Arab groups also have reservations.

Salah al-Obeidy, a spokesman for al-Sadr, told Al Jazeera that Friday’s protest was intended to show that ordinary Iraqis are against the US-Iraq deal.

“In principle, we have seen that this agreement has been reached between unequal parties. The Americans are dominating everything and are now leading negotiations,” he said.

“The Iraqi prime minister [Nuri al-Malki] has confessed in his last announcement that he and his party are not accepting all the items in this agreement – yet he still signed it.”

The agreement requires the US to hand back control of Iraqi air space and remove troops from the streets by June 2009 before leaving the country entirely by the end of 2011.

The pact also states that US forces will need Iraqi warrants to carry out arrests and US contractors will be subjected to Iraqi law.

However, there is still uncertainty over who will have jurisdiction over US troops who are believed to have committed crimes on Iraqi soil. The issue has been a major sticking point in previous debates over the pact.

In a speech on state television on Tuesday, al-Maliki attacked critics of the pact, saying they wanted the Americans to stay so that they could fight them.

He said the Iraqi cabinet had reservations about the pact, but saw it as the best way to return Iraq’s sovereignty.

Parliament must pass the deal before it can take effect. 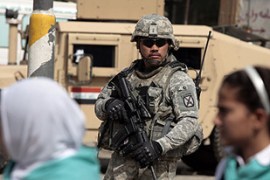 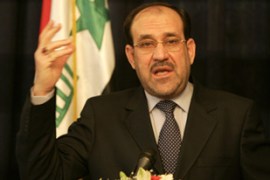 Iraq debate on US pact disrupted

Parliamentary speaker adjourns discussion of agreement on US troop withdrawal.