The supertanker was loaded to capacity with two million barrels of oil when it was seized along with 25 crew members – 19 from the Philippines, two from Britain, two from Poland, one Croatian and one Saudi.

It was the biggest vessel ever hijacked.

Somali pirates have now seized three ships off the coast of the Horn of Africa in the past three days.

A Greek tanker, a Thai fishing boat and a Hong Kong-registered vessel have been captured despite a large international naval presence the waters off Somalia.

Andrew Mwangura, co-ordinator of the East African Seafarers’ Assistance Programme, said on Wednesday that the Greek vessel had been taken in the Gulf of Aden on Tuesday.

According to the International Maritime Bureau (IMB), the Thai fishing boat had 16 crew members on board.

The INS Tabar, an Indian frigate, one of dozens of warships from several countries protecting shipping lanes in the Gulf of Aden, attacked a Somali pirate ship on Tuesday after coming under fire, according to Nirad Sinha, a navy spokesman.

It was the first time a pirate mother ship had been destroyed.

Somalia’s pirates have openly displayed their material rewards from the ransoms paid from the hijacking operations.

Mwangura said: “The pirates are sending out a message to the world that ‘we can do what we want, we can think the unthinkable, do the unexpected’.”

They are said to have built luxurious homes and propped up the economy in the semi-autonomous region of Puntland, where many of them are based.

In an impoverished country, where every public institution has crumbled, many see piracy as the only business in town.

“The pirates depend on us, and we benefit from them,” Sahra Sheik Dahir, a shop owner in Haradheere, said.

Amid the anarchy and lawlessness in most parts of Somalia, northern coastal towns like Haradhere, Eyl and Bossaso, the so-called pirate economy is thriving, due to the money pouring in from pirate ransoms that have reached $30 million this year alone.

The seizure of the Sirius Star, prompted South Korea to look at sending military vessels to join US, French and Russian warships already operating in the area. 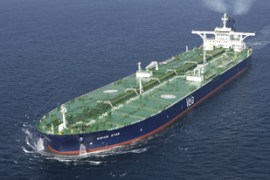