Mugabe and the MDC are preparing to hold another round of talks in South Africa next week to seek a breakthrough as political tensions rise.

South Africa’s cabinet said it was disappointed to note that “political interests have taken priority at the expense of the lives of ordinary Zimbabweans”.

A statement said: “Cabinet decided that the approved $28.33m will be retained for agricultural assistance to Zimbabwe.

“However, this money will be only disbursed once a representative government was in place and in time for the next planting season in April 2009.”

Themba Maseko, a cabinet spokesman, said: “We’re going to make sure that everything is done to force the parties to go back to the negotiating table.”

September’s power-sharing deal had raised hopes that a new leadership would get on with the task of rescuing the country’s ruined economy.

But the power struggle between Mugabe and Morgan Tsvangirai, the MDC leader, has overshadowed daily hardships including food and fuel shortages that have driven millions of Zimbabweans out of the country and strained regional economies.

Zimbabwe’s rival parties will meet with Thabo Mbeki, the former South African president, who is mediating, next week in South Africa to discuss the deadlock, the South African foreign ministry said.

The MDC has said it plans to offer its own amendment to Mugabe’s draft bill at the meeting in South Africa, while insisting that the talks focus on breaking the impasse on the cabinet rather than the proposed amendment.

Nelson Chamisa, a spokesman for the larger of the two MDC factions, said: “It is quite disturbing that people are trying to stampede us into a political settlement.”

Meanwhile,  there are new signs of economic deterioration in what used to be one of Africa’s most promising countries.

Zimbabwe’s gold output, which accounts for a third of its export earnings, hit an all-time monthly low of 125kg in October as economic woes forced more mine closures, a mining spokesman said on Thursday.

Critics accuse Mugabe of ruining the country, but the 84-year-old leader, in power since independence from Britain in 1980, says the economy has been sabotaged by forces opposed to his nationalist stance. 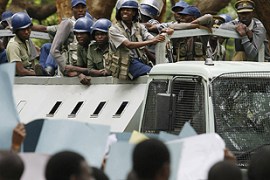 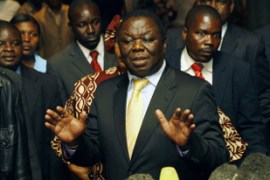