DMG denied the allegations and said its “business model is not consistent with a pyramid scheme.”

“David Murcia and DMG have always been characterised by their respect for the law,” it said in a statement published in the La Estrella Panamanian newspaper.

Eduardo Lin Yuen, a Panamanian national police spokesman, told the Associated Press that he had received Colombia’s request to detain Murcia, and that authorities were seeking him.

The government seized control of DMG and another company allegedly involved in pyramid schemes, Proyecciones DRFE, whose collapse led to looting, rioting and two deaths in disturbances last week.

Police said $270 million was believed to have been lost in a scheme run by the DRFE, or “Easy Money, Fast Cash,” agency across its 240 offices.

Pyramid schemes can offer dramatically high returns by using later investors’ money to pay off those who invest first.

But they collapse when the flow of incoming money is not enough to pay the growing pool of investors.

The scheme collapsed amid rumours that its owner, Carlos Alfredo Suarez, who local residents said had, until recently, sold snacks on the streets and looked after parked cars, had fled the country. 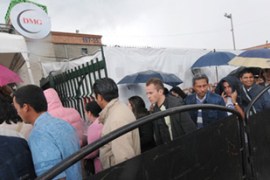