The nuclear co-operation deal extends to the use of nuclear technology in medicine and nuclear waste treatment, Chalgham said.

The deal was signed by the head of Rosatom, Russia’s atomic energy agency, and Libya’s head of nuclear energy management, sources in the Libyan delegation said.

But Dmitry Peskov, a spokesman for the Russian government, said no agreement had been signed.

Chalgham said that Tripoli and Moscow reached deals related to calls for the creation of a world body for gas-producing countries.

Gaddafi had earlier said that Libya and Russia should work together on shared energy interests.

“We will discuss economic issues and coordination in the foreign-policy sphere, matters which are very important at the moment,” Medvedev said.

During talks with Putin, Gaddafi said: “The development of our bilateral relations is a positive factor for the international situation… It contributes to the re-establishment of geopolitical equilibrium.”

There have been several reports that Russia is in interested in building a nuclear power plant in Libya.

Russian newspapers have also reported that that Moscow and Tripoli are examining a deal to upgrade Libya’s Soviet-era military arsenal.

Libya may offer to host a Russian naval base at the Mediterranean port of Benghazi, the Russian newspaper Kommersant reported on Friday.

“The Russian military presence will be a guarantee of non-aggression against Libya from the United States,” it said.

The talks come amid improving relations between Russia and Libya, which in 2003 renounced weapons of mass destruction and took responsibility for the bombing of a passenger aircraft over the Scottish town of Lockerbie, in which 270 people were killed.

Libyan sources in Moscow say that Gaddafi is expected to visit Ukraine and Belarus after his trip to the Russian capital. 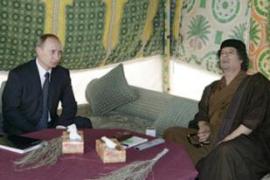 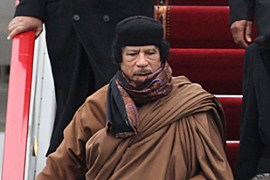 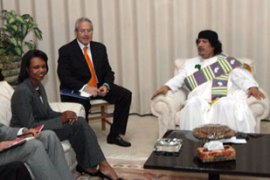