“I think there is a misunderstanding, nobody here is seeking help more than co-operation between us and Britain or any other friendly countries,” he said.

“Qatar is not excluded.”

Brown is using his four-day tour of the Gulf to call on the oil-exporting countries to be among the biggest donors to the IMF’s coffers, which at $250bn have already been depleted by emergency cash calls from Iceland, Hungary and the Ukraine totalling $30bn.

After a three-hour meeting with Abdullah late on Saturday, Brown said: “The Saudis will, I think, contribute so we can have a bigger fund worldwide.”

A senior British government source, who declined to be named because he was not authorised to comment, said that during the talks the Saudis had been concerned about becoming a “milk cow” to prop up “basket-case” economies in other parts of the world.

Brown will visit the UAE on the final leg of his tour.

‘Seat at the table’

Brown has been eager to win favour with Arab states by stressing that they have not been represented enough on international bodies and promising them a “seat at the table” as world leaders draw up plans for new international financial regulation.

The trip is something of a precursor to a summit of world leaders in Washington DC on November 15 to discuss the international financial situation, including contributions to the IMF.

Brown has criticised the Organisation of the Petroleum Exporting Countries’ recent decision to cut oil production in an effort raise prices. He was expected to highlight these concerns on the tour.

Within six months, oil prices have fallen by more than a half to less than $70 in the past couple of weeks. 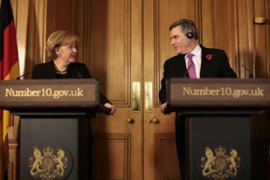 Gordon Brown to appeal to leaders to help combat the global financial crisis.