A signing ceremony between Hoshiyar Zebari, the Iraqi foreign minister, and Ryan Crocker, the US ambassador, was even held in Baghdad on Monday, although the deal still needs to be approved by parliament.

The pact was expected to pass Iraq’s 275-member parliament after receiving approval from the 28 cabinet members on Sunday, with the support of the major political blocs representing Iraq’s Shia majority and its Sunni and Kurdish communities.

Iraqi members of parliament held on Monday a first reading of the pact, the start of the approval process that is expected to run into next week.

Muqtada al-Sadr, the Iraqi Shia leader, failed to halt the first reading but his deputies have pledged to stop the deal from going through.

“The Sadr movement will use every legal avenue to work to stop this agreement,” Mahmud Mashhadani, Iraq’s speaker of parliament, said.

The deputy speaker said on Sunday that the military pact would pass through a week-long process of deliberation before a final vote on November 24.

But the deal got a boost on Tuesday when Iraq’s influential leading Shia cleric, Grand Ayatollah Ali al-Sistani, indicated that he would not intervene.

His office quoted him as saying that he wanted the pact to secure Iraqi stability and sovereignty and “win the support of all Iraqis”.

Under the deal, a system will be provided for Iraqi courts to try US soldiers for serious crimes committed while off-duty, but only under very tight conditions.

Al-Maliki also pledged that Iraq “will never be a conduit or a staging ground for an attack on any other nation” and has dispatched envoys to explain the agreement to the United Arab Emirates, Iran and Turkey.

In its first reaction, a senior Syrian official dismissed the deal as an “award to the occupiers” of Iraq.

“We shouldn’t give occupiers any reward or prize … On the contrary, they should apologise for the damage they have caused,” Mohsen Bilal, the Syrian information minister, said.

He said the pact “gives [the US] rights at the expense of the Iraqi people and their neighbours”.

But Iran’s reaction has been much more positive. Hassan Qashqavi, the Iranian foreign ministry spokesman, did not explicitly reject the agreement on Monday.

Another senior Iranian official welcomed the deal for the first time, saying the Iraqi government acted “very well” in approving it.

“We hope the outcome … will be in favour of Islam and Iraqi sovereignty.” 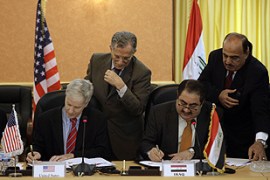 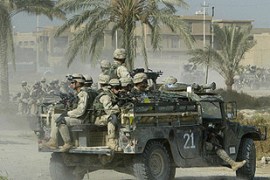 Cabinet defies hardliners’ opposition and agrees to let US forces stay until end 2011. 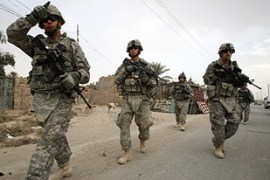