News of the sale came a day after General Motors (GM), another US car giant, said it would sell the remaining three per cent it held in Suzuki for $232m, in an effort to shore up its fast-dwindling cash reserve.

Reeling from the worst slump in US car sales in more than two decades, Ford, GM and the other “big three” US car manufacturer, Chrysler, are desperately trying to raise cash to stay solvent.

On Tuesday executives from all three pleaded with the US congress for $25bn in aid to save their businesses, warning that their collapse would cause “catastrophic” damage to the already ailing US economy.

Their call though was given a sceptical reception, with politicians questioning whether the struggling car giants would be able to pay back any loans, or if the money would simply be used to “perpetuate failure.”

Since taking control of Mazda in 1996, Ford has pulled the Japanese carmaker back from the brink of collapse while Ford has benefited by tapping Mazda’s strength in the development of smaller cars.

The two companies, which share vehicle platforms and engineering resources and jointly own assembly plants in the US, Thailand and China, said they would maintain their strategic ties, and analysts agreed that there would be little change in their co-operation.

Ford shares dipped to a 26-year low of $1.70 on Tuesday before recovering to close at $1.73 while Mazda’s shares were 1.6 per cent higher on Wednesday. 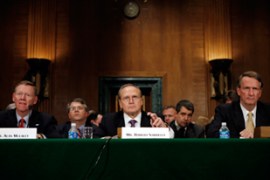 US car makers plead for bailout

US manufacturing giants seek $25 billion to stave off “catastrophic collapse”.