Roy Bostock, Yahoo’s chairman, said on Monday that Yang and the board of directors “all agree that now is the right time to make the transition to a new CEO who can take the company to the next level”.

Yang will step down as soon as the board of directors finds a replacement.

Bostock said: “We are deeply grateful to Jerry for his many contributions as CEO over the past 18 months, and we are pleased that he plans to stay actively involved at Yahoo as a key executive and member of the board.”

In an email to employees, Yang said: “From founding this company to guiding its growth into a trusted global brand that is indispensable to millions of people, I have always sought to do what is best for our franchise.”

He said he would “continue to focus on global strategy” in returning to his former role as “chief Yahoo”.

A proposed advertising partnership with search giant Google fell through in November with US antitrust regulators opposing it.

The deal had been expected to earn Yahoo hundreds of millions of dollars in the first year.

The company also announced in November that it will lay off at least 10 per cent of its workforce.

Ross Sandler, an analyst at RBC Capital Markets, told the Reuters news agency that Yahoo was “in desperate need of change and this is clearly one way to do it”.

Sandler said he expected Yahoo shares to move higher as investors speculate that Microsoft might now make another play for the company.

“Jerry was the roadblock for the last deal getting done,” he said.

The company’s shares rose four per cent after Monday’s announcement. 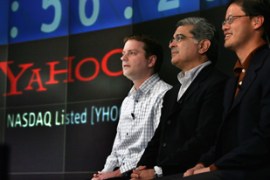 Decision follows rejection of its attempt to raise offer price to $33 per share.