Catherine Mabille, Lubanga’s lawyer, told judges that she would wait to read their judgement in full before taking any further legal steps, although she said she would do everything she could to avoid more delays.

Lubanga, 47, is accused of abducting minors under 15 and using child soldiers in attacks by the armed wing of his Union of Congolese Patriots (UPC) between September 2002 and August 2003 in the war-torn DR Congo.

His trial was to have started in June but was postponed when the court ruled prosecutors had wrongly withheld evidence potentially favourable to Lubanga’s defence.

The court said that this prevented Lubanga from preparing a proper defence, with more than 200 documents not disclosed.

Lubanga subsequently applied to be released, saying there were no legal grounds to hold him, but his request was rejected by the judges.

Many of the withheld documents have since been made available to the tribunal under strict conditions.

The UPC is mainly composed of people from the Hema ethnic group and has been accused of massacring civilians from other groups but Lubanga has rejected all responsibility for the killings.

He left DR Congo in 2003, after a European Union force was deployed in an attempt to halt the bloodbath.

Lubanga was arrested in March 2005 in Kinshasa, the Congolese capital, after the country’s president asked the ICC to  investigate.

The conflict over control of Ituri, which is one of the most lucrative gold-mining territories in the world, created tens of thousands of refugees.

Human Rights Watch says it has gathered hundreds of testimonies documenting widespread human rights abuses by Lubanga and others in Ituri.

Survivors told the New-York based organisation that the UPC carried out ethnic massacres, murder, torture, rape and mutilation, as well as the recruitment of child soldiers.

The ICC was established in July 2002 and is only able to rule on events which took place after its creation.

Lubanga will be the first person to face war crimes charges at the court in the Netherlands.

Congolese war crimes suspect remains in custody despite the suspension of his trial. 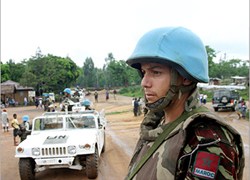