Syria has been accused of involvement in al-Hariri’s assassination in order to maintain control over Lebanon, its small eastward neighbour. Damascus has denied any role in the killing.

Al-Assad must choose what path Syria will take in regard to relations with other Middle East countries, Miliband said.

“Over the last 18 months I’ve been talking with the Syrian foreign minister about her [Syria’s] responsibilities in the region, in respect of terrorism, in respect of Iraq, in respect of the Middle East peace process, and we’ve got the chance now to take those discussions further forward,” he said.

Britain has supported ongoing rounds of indirect peace talks between Syria and Israel, which have been brokered by Turkey.

Those negotiations have revolved around the Golan Heights, a strategic plateau that Israel captured from Syria during a Middle East war in 1967.

Damascus has also come under increasing pressure from the US to police its western border with Iraq.

Washington says the 2,000km-long border is a route for smugglers and foreign fighters who go on to launch attacks in Iraq.

Miliband’s visit comes as the United Nations’ nuclear inspectorate prepares to report its findings on samples gathered from the site of an alleged nuclear reactor in Syria, which Israeli aircraft bombed in September 2007.

Mohammed ElBaradei, head of the International Atomic Energy Agency, said on Monday that traces of uranium found at the site in June are not sufficient evidence of a covert nuclear programme.

Uranium particles discovered thus far by IAEA investigators in Syria were not enriched to a level suggestive of a nuclear weapons programme, he said. 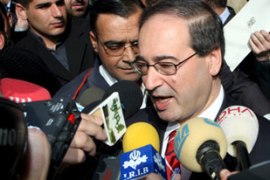 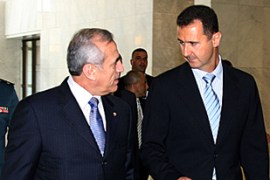 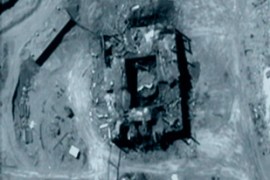 Samples from Israeli-targeted site fail to prove it was hosting nuclear facilities. 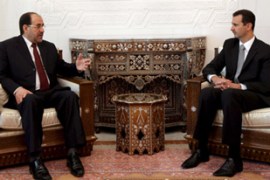