US officials issued a tsunami warning for an area within 1,000km of the epicentre, but the Indonesian tsunami alert was lifted shortly after being issued.

The Hawaii-based Pacific Tsunami Warning Centre (PTWC) had warned that the earthquake had “the potential to generate a destructive regional tsunami along coasts located within a thousand kilometres of the earthquake epicentre”.

Speaking to Al Jazeera, the PTWC spokesman Stuart Weinstein said: “This is a much smaller earthquake than the Sumatra earthquake of December 2004, it is not going to be anything remotely like that.”

The Indonesian state-run Antara news agency said thousands of people fled their homes and hotel rooms in Gorontalo when the earthquake struck at 17:02 GMT.

The 2004 Asian tsunami killed nearly a quarter of a million people, most of them in Indonesia’s Aceh region.

That disaster led to pressure for better tidal warning systems in the region.

The $130m system is able to detect an earthquake at sea and predict within five minutes whether it could cause a tsunami.

Susilo Bambang Yudhoyono, the Indonesian president, said at the launch that Indonesia was “living on the edge”.

“Three tectonic plates – the Eurasian, Indo-Australian and Pacific meet here. This kind of disaster can strike at any time,” he said. 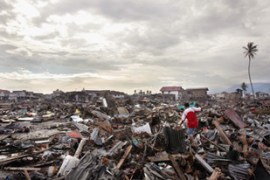 Asian tsunami ‘not the first’

Studies find evidence deadly 2004 tsunami was not the first and likely not the last. 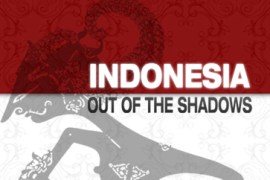 In video: Focus on Indonesia 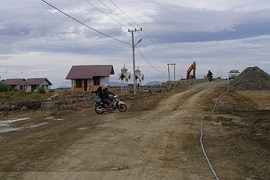 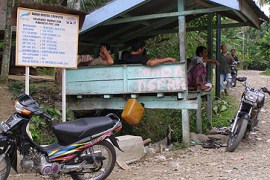 Frustration over unfair aid distribution and foot-dragging could boil over.