Two of the five main transmission lines that supply power to the city had to be taken down because of damage to a converting station, and a third power line was damaged by heat.

A separate fire flared southeast of Los Angeles in Orange and Riverside counties, charring more than 1,200 acres of land and destroying at least 10 structures in the communities of Yorba Linda, Brea and Corona.

Winds fanned the fire in the foothills near Sylmar northwest of Los Angeles.

Antonio Villaraigosa, the mayor of Los Angeles, said the fire had destroyed more homes than any other fire in the past decade.

“We’re at the mercy of the wind. Mother Nature’s not been too good to us for the last 15 hours,” he said.

Arnold Schwarzenegger, the California governor, declared a state of emergency in Los Angeles County, opening the way to additional resources.

Firefighters also continued to battle the two-day-old blaze in the celebrity enclave of Montecito, further up the coast near Santa Barbara, where 111 homes have been destroyed.

By early Friday, the fire had spread to the fringes of neighbouring Santa Barbara city, where at least 20 homes were damaged, officials said.

Local authorities say more people could be forced to flee if the fire spreads, although winds were reported to have died down by mid-morning.

Those injured were treated for burns and smoke inhalation.

Southern California is on high wildfire alert this weekend due to hot weather, drought conditions and forecasts of strong winds blowing in from the desert.

A year ago, 30 wildfires burned during one week in the southern part of California, destroying about 2,000 homes and forcing a record 500,000 residents to flee. 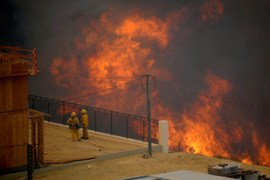