The other set of images, taken by a team using telescopes in Hawaii, shows three giant planets orbiting a star named HR8799 in the constellation Pegasus, about 130 light-years away from the Earth.

None of the four planets are believed to be habitable but they raise the possibility that more hospitable planets could be found elsewhere.

“It is only a matter of time before we get a dot that’s blue and Earthlike” said astronomer Bruce Macintosh of the Lawrence Livermore National Laboratory in California, who led the Hawaii team of photographers, said.

“It is a step on that road to understand if there are other planets like Earth and, potentially, life out there”, he said.

In the past 13 years, scientists have discovered more than 300 planets outside the solar system, but they have done so indirectly by measuring changes in gravity, speed or light around stars.

Ed Weiler, Nasa’s space sciences chief, said the new photos were important and compared the effort to a hunt for elusive elephants.

“For years we’ve been hearing the elephants, finding the tracks, seeing the trees knocked down by them, but we’ve never been able to snap a picture. Now we have a picture,” he said.

But doubts persist about whether these are the first photos of exoplanets, or planets outside our own solar system.

Other astronomers have made earlier claims, but their pictures have not been universally accepted.

The photos released on Thursday have still not convinced all experts.

Alan Boss, an exoplanet expert at the Carnegie Institution of Washington, and Lisa Kaltenegger, a Harvard exoplanet hunter, both said more study was needed to confirm the new set of photos were those of proven planets and not just brown dwarf stars. 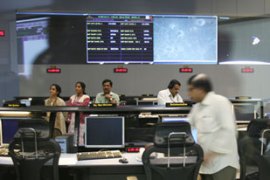 New Delhi marks a mile-stone in its space programme with first lunar landing.