Nicolas Sarkozy, the French president, whose country holds the EU’s rotating presidency, led an EU delegation in talks with Russian officials in Nice on Friday, after which the two sides are expected to resume negotiations on a new partnership agreement.

Russia and France have both called, separately, for reform of the financial system and both have blamed the current global crisis on the US.

Medvedev said that the Russian and EU positions “coincide” on a number of points in relation to the crisis, apart from a few “nuances.”

An official in Sarkozy’s office had already noted an “overlap” in their stance.

Medvedev praised the strength of Europe’s single currency, the euro, which he said had helped maintain stability during the economic turmoil, and vowed to “develop the rouble” to become a serious alternative to the US dollar.

“The new administration wants to see things in an objective way, and I hope that the new president will be able to do so,” he said.

“We are open to developing good neighbourly relations with the United States.”

Officials say that the Georgia-Russia conflict had severely undermined relations, but common ground could be found as soon as the summit gets underway.

“The main thing is that the summit takes place and will consider the most complicated painful issues and offer mechanisms to build a new financial architecture,” Medvedev said. 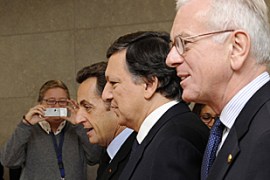