Unrwa usually distributes emergency food rations to about 750,000 people in the Gaza Strip, half the population of the territory.

“Pushing people to the brink of desperation every few months and forcing Unrwa into yet another cycle of crisis management, is not in the interest of anyone who believes in peace, moderation and  stability,” Gunness said.

The passage of humanitarian aid into Gaza has repeatedly been stopped over the last few days, aid agencies say, marking a turning point on Israel’s grip on the territory.

The International Committee for the Red Cross (ICRC) said on Thursday that Israeli border authorities had turned back its lorries from the Kerem Shalom crossing.

Ayman Mohyeldin, Al Jazeera’s correspondent, said that a queue of lorries had waited at the Kerem Shalom crossing throughout Thursday, waiting in vain for the Israeli military’s green light.

“It is the second time this year that UN supplies have not reached Palestinians,” he said from the crossing point.

“And it really highlights what Palestinians say has become their routine – not knowing when border crossings will open, not when when they can leave, and not knowing if they can get what they need.”

Gaza, which is controlled by the Palestinian group Hamas, has faced a crippling Israeli blockade in recent months.

Israel says the blockade is aimed at improving its security from Palestinian rocket fire.

A six-month truce between Israel and Hamas has come under increasing strain in the last week, after Israeli forces entered Gaza in a move against a tunnel network used  by Palestinian fighters.

At least 11 Palestinians have been killed by Israeli forces in recent days, while more than 130 rockets have been fired from Gaza.

“The rockets are a natural response to [Israel’s] aggression,” Fawzi Barhoum, a Hamas spokesman, said.

In another development, Israel cut off European Union-funded fuel supplies to Gaza’s only power plant on Thursday.

“It is completely shut down,” Qanaan Obeid, an official from the Palestinian Energy Authority, said.

Between a quarter and a third of Gaza’s power comes from the plant, with the remainder the supplied by Egyptian and Israeli national grids.

Katharina Ritz, mission leader for the ICRC, said that “every day the situation is getting more and more precarious for Gazans”.

She said that medical equipment is in particularly short supply in the coastal territory.

Peter Lerner, an Israeli defence ministry spokesman, said that the closure of the Gaza crossings came in response to rocket fire.

Reopening the crossings “has been delayed because of the mortar shelling that impedes the proper functioning of the crossing points”, he said.

The Israeli government first implemented a blockade of the territory after fighters loyal to Hamas, which Israel and the US deems a terrorist organisation, forced Palestinian Fatah fighters out of Gaza in June 2007. 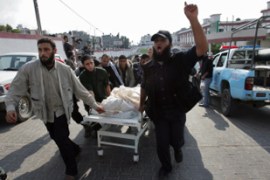 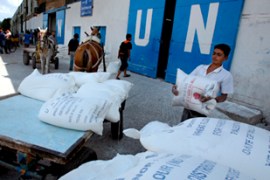 Spokesman warns food supplies could peter out in 48 hours as Israeli blockade bites.