“The Islamic militia are patrolling in the streets,” Fadumo Hussein Dahir, a shopkeeper in Elasha, said.

“They have dismantled a roadblock, where pro-government militia used to take
extortion money from passing vehicles.”

Peter Kessler, the senior external affairs officer for the UN High Commissioner for Refugees (UNHCR), told Al Jazeera: “The situation in Somalia is worsening day by day. We have upwards of a million people who are displaced inside the country reliant upon aid, and it is a tragic situation now going beyond Somalia itself into neighbouring Kenya.

“In Mogadishu just in the last month we have seen 35,000 people flee their homes, caught up in the fighting. Across the country the situation is much the same, there is indeed a lot of insecurity and uncertainty in the country.

“With ships being hijacked, aid convoys being halted and aid workers being kidnapped by warring clans, it is very difficult to work on the ground. The aid community can not function effectively in all parts of the country, that requires the co-operation of the parties on the ground.”

The Shabab aims to unite Somalia under sharia.

In the port town of Marka, a senior commander enforced sharia immediately.

The fighters have broken away from the Islamic Courts, with the group’s political leadership fleeing into exile and the Shabab engaging in a guerrilla war that has left thousands of civilians dead.

Shabab mount daily attacks on government troops in the capital, but analysts say it will be hard for them to take control of the city completely while heavily armed Ethiopian troops allied to the government remain stationed there.

Abdirahin Isse Adow, a spokesman for the fighters, said: “Our fighters have taken the control of the area to provide the security of the displaced people, who have been suffering from insecurity.”

Sheik Abukar, a senior Shabab commander, told residents in Marka that sharia would be enforced on Thursday.

“We inform you that from today on, all areas under our control will be ruled by Islam,” Abukar said on a local radio station.

“All business centres must be closed at prayer time. No tax will be taken, carrying illegal arms in the city or holding them in houses is banned, and we will change the behavior of the youth here.” 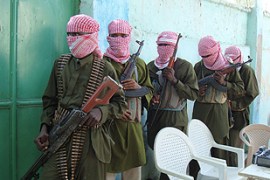 Marka, an entry point for food aid, falls to Shabab as a pro-government militia flees.