Two British soldiers were killed in the southern province of Helmand while on patrol on Wednesday with Afghan soldiers, when their vehicle was blown up by a bomb, the British defence ministry said.

Ghafoor Khan, a spokesman for the provincial police chief, said that the market was crowded with people buying and selling sheep, cows, goats and other animals at the time.

Khaibar Mohamand, a local governor, said: “At least nine civilians are killed here on the spot.”

Al Jazeera’s David Chater, reporting from Kandahar, said that the Taliban has claimed responsibility for the attack.

“The Taliban says the attack was carried out by the Tora Bora Mujahidin. This is unusual because this whole area has not been subject to these sorts of attacks before, but this time the Taliban has opened up another front near Jalalabad,” he said.

“It seems the Taliban is proving much more resilient than anybody thought. It is showing its reach and depth in this latest attack. Everybody admits that the strategy here in Afghanistan is a failure and the country is, in effect, spiralling downwards.”

The blast comes a day after an intelligence agency in Kandahar province was attacked. At least seven people died in that bomb attack.

Speaking to Al Jazeera on Thursday, Mark Kimmitt, the US assistant secretary of state for political military affairs, said: “It is clear that both the Bush and Obama administration recognise that there is work to be done. Both Nato and the US are willing to put the commitment into Afghanistan in order to see the results similar to inside Iraq.

Kimmitt argued that the Taliban are not a homogeneous element.

“There are various groups that we sometimes mislabel as Taliban. There is clearly a place in Afghanistan for organisations that want to adhere and give their allegiance to the central elected government of Afghanistan,” he said.

“But any suggestion that there will be a power-sharing arrangement between rogue extremist organisations and elected government is not the direction that anybody wants to head to.”

Despite fears that security across Afghanistan has deteriorated in recent months, Britain has declined to say whether it would send extra troops to the country.

“I don’t agree with the assertion that we now look like we are sending more troops,” a spokesman for Gordon Brown, the British prime minister, said.

The comments came after Brown met Hamid Karzai, Afghanistan’s president, for talks in London on Thursday.

On the other hand, Sweden plans to send an additional 110 troops to Afghanistan, bringing its contingent to around 500 in 2009, and to increase its aid package to the country, the government said on Thursday. 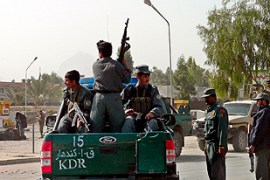