Kabuye was arrested on an international warrant issued by France in 2006 for her and eight other associates of Kagame.

She is accused of involvement in the shooting down of an aeroplane carrying Juvenal Habyarimana, the Rwandan president, in 1994. His death was one of the sparks that ignited a campaign of genocide in the central African nation, German prosecutors have said.

Kabuye was in Frankfurt to prepare a visit by the Rwandan president, who is on a tour of European countries.

“Rose’s visit to Germany was not private. It was official in that she was doing the work of the Rwandan president,” Kagame said.

German prosecutors said she was not protected by diplomatic immunity as she was not travelling with the president.

When asked about the situation’s effect on co-operation with the European Union, Kagame said: “Certainly the arrest of Rose has some implications, foreseen or unforeseen, because in many ways it’s a violation of the sovereignty of Rwanda.

“We will see how we can challenge such actions, which in my view are simply a question of being arrogant and people being a law unto themselves,” he said after visiting Kabuye in prison.

Kagame said he expected Germany to extradite her to France within days. Kabuye’s lawyer has said she is willing to go before a French judge.

Ties between France and Rwanda have been badly strained since the warrants were issued.

On Monday, hundreds of people, including Kabuye’s husband, protested outside the German embassy in Kigali, chanting “Free Rose, Free Rose”.

The German government has said it was obliged to act on the arrest warrant.

Kagame was the leader of the Rwandan Patriotic Front when Habyarimana’s aircraft was shot down in 1994. His movement eventually defeated the government’s Hutu militias to end the mass killings of Tutsis and moderate Hutus. 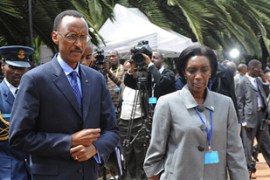 Politician is detained in Germany for alleged role in 1994 killing of Rwandan president. 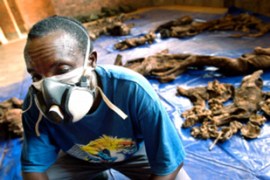 Paris insists findings of report were neither independent nor legitimate. 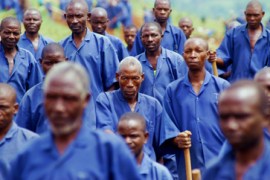 Al Jazeera finds Rwanda’s veterans cannot forget the horrors of the past.