But survivors say those plans are moving far too slowly, with funds bogged down in bureaucracy and creamed off by corrupt local officials.

Revisiting the quake zone six months on, Al Jazeera’s China correspondent, Tony Cheng, found many homeless survivors angry at local authorities who they say have not delivered on government promises of compensation.

In one town our correspondent found riot police and plain clothes officers deployed to control a crowd of protesters outside a local government office.

Some accused corrupt local officials of stealing the promised compensation.

“We’re supposed to get $60 per square metre compensation for our destroyed houses,” one survivor said.

“But they’re only offering us $15 – where has the rest of the money gone?”

Many other survivors are facing similar hardship and, while the government has managed to build hundreds of thousands of prefabricated temporary homes, the occupants have little to do.

In some camps unemployment levels are around 80 per cent, with many facing little prospect of finding work or more permanent housing.

He now has to make do with a single room he shares with his granddaughter in a camp built to accommodate more than 100,000 survivors.

As the bitter Sichuan winter nears, Zhang told Al Jazeera he was grateful for the assistance he has received, but nonetheless felt that not all the aid promised by the central government was getting through.

The money and aid for the refugees should be monitored carefully to make sure it all gets to the refugees and those who need it, he said. 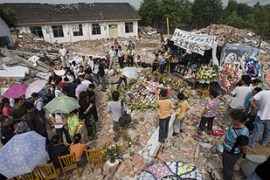 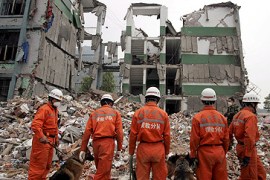 Leaders brace for political backlash amid allegations of inadequate construction.