The pillaged towns, including Kaina and Kirumba, are strategically located in the north of North Kivu province, where rebels loyal to renegade general Laurent Nkunda control much of the territory following an offensive launched on August 28.

Madnoge Mounoubai from Monuc, the UN Mission in the DR Congo, confirmed reports of looting by the Congolese army.

“We have received reports that there is a large movement of Congolese soldiers from a base in Buito, which is in Ruchuro, moving toward Lubero.

“During this movement, seven villages were looted. We don’t have any information on abuse of the popluation itself, but we have reports that there have been looting of properties.”

Ban Ki-moon, the UN secretary-general, has called for urgent reinforcements for the 17,000-strong UN force in DR Congo.

“I have requested on an urgent basis to the Security Council for an additional resources and man power, that’s something around 3,000, a little more than 3,000 soldiers,” he said.

Tens of thousands of people have been displaced in eastern Congo’s provincial capital of Goma as fighting between the rebels and the Congolese army rages.

“Because of the ongoing fighting, these people have received virtually no assistance. Their situation has grown increasingly desperate,” Ban said.

“I urgently call for an immediate ceasefire in these areas to allow humanitarian assistance to reach many thousands of displaced persons.”

“They need troops with special training who can rapidly be deployed wherever there is fighting and where lives of civilians are at risk,” he said.

“Right now Goma is at the risk of being attacked by the rebels but there are just 800 peacekeepers – not enough to stop the rebels from marching onto this [Goma] town.”

Adow also said that Ban Ki-moon, the UN secretary-general, would urge a review of the mandate of Congo’s peace mission with regard to rules of engagement.

Meanwhile, a cholera outbreak has been reported in camps housing internally displaced people.

The World Health Organisation (WHO) warned on Tuesday that around 1,000 cases of cholera have been reported since October.

Dr Claire-Lise Chaigot of the WHO warned that “all the ingredients are there” for a cholera epidemic.

Erna van Goor, the head of mission for Medicins Sans Frontieres in Goma, told Al Jazeera: “We are having cases (of cholera) in various refugee camps

“We have fears that this might spread as the conditions in these camps are not so good, meaning that there is not engouh clean water, nor latrines.”

“We hope that we can keep a lid on a major epidemic outbreak.”

Al Jazeera’s correspondent found desperate refugees surviving on leaves and hundreds of others trying to return to their homes – a movement that could lead to further cholera outbreaks, health workers say. 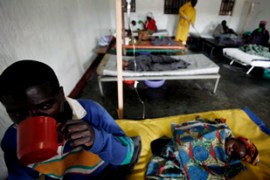 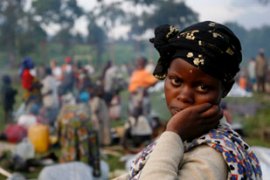