Both sides blamed each other for the violence, with one Armenian monk saying that Greek Orthodox worshippers attempted to place their monk inside the tomb – which he said is not permitted.

The fight broke out during the Feast of the Cross, during which the Armenian community marks what they believe was the fourth-century discovery of the cross upon which Jesus was crucified.

However, Greek Orthodox clergy denied they were responsible for the brawl.

“We protested peacefully, we stood here in the middle and we claimed that we shall not leave the procession … unless they leave our guardian inside. This didn’t happen and in that moment the police interfered,” he said.

“We tried our best not to use violence against the police or against the Armenians because this is our attitude – peaceful, co-access on the holy sites.”

Fights are not uncommon in the Church of the Holy Supulchre between representatives of the various Christian sects who jealously guard their sections of and rights of access to the site. 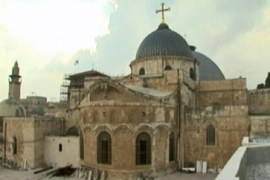 Rival Christian groups argue over who owns the ancient Church of the Holy Sepulchre.