The soldiers died when an explosion hit their vehicle near Lashkar Gah in southern Afghanistan. The Telegraph reported the soldiers had been travelling in a Snatch Land Rover at the time of the incident.

Al Jazeera’s Hashem Ahelbarra, reporting from Kabul, said: “The ministry of defence brushed aside those accusations saying that the four soldiers would definitely have died even if they were driving a heavy armoured vehicle because of the power of the landmine.”

A defence ministry spokesman confirmed Morley had resigned, but stressed
there were also “personal reasons” for his decision to step down on Friday.

The spokesman, who declined to be named, said the SAS commander had previously expressed concerns about military equipment but did not mention that in his resignation.

“Equipping our personnel is a clear priority and we are absolutely focused on providing them with a range of vehicles that will protect them from the ever-shifting threats posed by the enemy,” the ministry said in a statement issued on Saturday.

Gordon Brown, the British prime minister, announced on Wednesday that Britain
would buy $1.13bn worth of 700 new and upgraded armoured vehicles to protect its forces in Afghanistan.

“This new package worth 700 million pounds to boost security for its own troops in Afghanistan is seen by many as if the ministry is caving into these accusations and pressures,” Al Jazeera’s Ahelbarra said.

“Morley was not the only man to have stepped down or resigned. There were four other high officers who resigned in Afghanistan because they said the ministry of defence failed to provide adequate equipment to its troops in the volatile region.”

The ministry of defence describes Snatch Land Rovers as protected patrol vehicles for use in “low-threat areas”.

Originally used in Northern Ireland, they are now deployed in Iraq and Afghanistan, the ministry says.

Britain has at least 7,800 troops serving in the Nato-led Isaf force in Afghanistan, where the Taliban has mounted increasing attacks in recent months.

British troops moving into southern Afghanistan’s Helmand province are “not looking for trouble”, their commander has said. 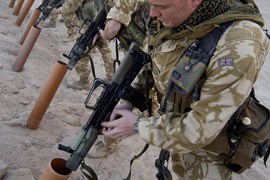