“We want to look at the security situation and gradually introduce our programmes,” Sean Raster, a logisitic officials with the British medical charity Merlin, said.

Alain Leroy, the head of UN peacekeeping operations, told Al Jazeera that the world body will “do the maximum” to protect civilians in Goma.

“I cannot say that it’s a 100 per cent guarantee, but in any case, we will do the maximum to protect the civilians of Goma.”

Ban also said that he will travel to the region this weekend for talks with Joseph Kabila, the president of the DRC, and Paul Kagame, his Rwandan counterpart.

It is said to come into effect from 11pm (2100 GMT)  to 5am (0300 GMT), following a spate of murders, rapes and lootings last week blamed on elements of the  government army.

According to an CNDP spokesman, the government of the DRC initiated the conflict and has “launched war on its people”, by refusing to negotiate with Nkunda’s forces.

“In rejecting the offer of direct dialogue with the CNDP, as recommended by the parliament, the government has just confirmed its militarist  position,” Bertrand Bisimwa said.

But Kinshasa has rejected the accusations.

Nkunda has announced the opening of “humanitarian corridors” through rebel lines, as a ceasefire he declared on Wednesday appeared to be holding.

The main road linking Goma and Rutshuru, 75km to the north, was again packed with people on Sunday as some of the displaced people tried to return to their villages. 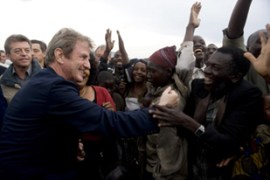 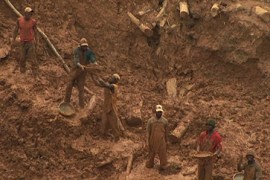