“He is a mid-level al-Qaeda man who was leading a high-profile life in Mir Wali,” the official said, referring to the second biggest town in the North Waziristan region.

But the AFP news agency said that local intelligence reports suggested Abu Akash was not among the dead.

Two missiles from a suspected US drone were said to have targeted a car and a house in Mir Ali.

A witness said the house was ablaze after the strike. Between 15 and 20 people were believed to have been killed.

A senior Pakistani security official said Abu Akash’s real name was Abdur Rehman, although he was known to have used many aliases.

He was known as Akash Khan in Mir Ali where he had lived since before 2001 and had once been in charge of town traffic.

“He is an al-Qaeda man but was not among the top hierarchy. He was involved in carrying out IED blasts in Afghanistan,” said the security official, referring to improvised explosive devices, or roadside bombs.

Kamal Hyder, Al Jazeera’s correspondent in Peshawar, said the attacks – if they were carried out by US drones – showed that “the American drone aircraft are now striking deeper and deeper into Pakistani territory”.

The attacks came just two days after Pakistan summoned Washington’s ambassador to Islamabad to receive a strong protest over a number of attacks inside Pakistani territory by US drones.

In a separate incident on Friday, a suicide bomber targeted a senior police official’s home in Pakistan’s northwestern frontier town of Mardan, killing eight people and wounding at least 15 others.

Shah was reported to have escaped the attack unhurt. 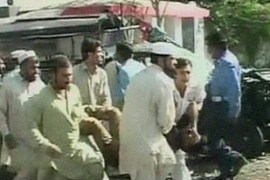