“It’s the duty of all Thais. No matter what happens, remember that the duty of Thais is to serve the country, religion and King. We are all born with that duty, of repaying what we owe to the country,” he said.

Chamlong was arrested after he left the prime minister’s official compound, where he and thousands of protesters have been barricaded since late August, to go and vote in the capital’s mayoral elections.

A court issued arrest warrants for Chamlong and eight other PAD figureheads on August 27, the day after thousands of protesters broke into government ministries and a state television station before overrunning Government House.

The nine were accused of inciting unrest and trying to overthrow the government, charges that amount to treason and can carry the death penalty.

But police were unable to execute the warrants since the nine refused to leave the Government House compound, where hundreds of PAD protesters have barricaded themselves in.

There was no immediate comment from the police about Chamlong’s arrest.

Chaiwat Sinsuwongse, another key figure in the protests, was arrested on Friday on the same charges.

The PAD accuses the government of acting as a proxy for Thaksin Shinawatra, a telecommunications tycoon who was ousted as prime minister in a 2006 military coup.

Thailand’s government is now led by Somchai Wongsawat, Thaksin’s brother-in-law, after Samak Sundaravej, in power when the protests began, was ousted last month.

Samak was forced from office last month when a court ruled that he violated a constitutional conflict of interest provision by accepting money for hosting a TV cooking show while in office.

Somchai has tried to open negotiations with the PAD but no real talks have taken place. 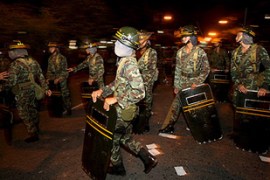 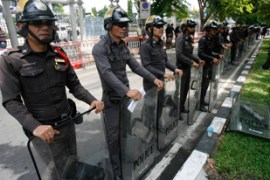