“People already have left Kilinochchi now so they are definitely east of the A9 road. That is why we have given them this safe passage,” he said.

The A9 is the main north-south highway, and most of the Tiger-held ground is to its east towards the port of Mullaitivu.

The military said that at least 29 Tamil Tigers and five soldiers were killed in the latest fighting around Kilinochchi. It also said in a statement that troops captured four Tamil Tiger bunkers after the battle.

The claims are impossible to independently verify as the war zone is off-limits to journalists and both sides routinely give differing figures.

Nanayakkara said that the army has created a 10km square no-fire area to allow civilians to go south.

Aid workers say 200,000 people remain trapped in the line of fire because the Tigers have prevented some from leaving and others do not trust the army’s promise of safe passage.

Gordon Weiss, a UN spokesman, said the first aid convoy since all aid agencies were ordered out last month had reached the conflict zone over the weekend, returning south of the frontline after delivering supplies.

The capture of Kilinochchi would be a major blow to the Tigers, who set up the town as the capital of their mini-state after taking the area from government forces 10 years ago.

LTTE fighters have not suffered such a setback since December 1995 when they lost the northern peninsula of Jaffna, which they considered their cultural capital.

Vipul Boteju, a retired army brigadier-general, said the success of the latest military campaign appeared to be due to the use of small groups along a broad front.

Past attempts to take Kilinochchi using large columns of soldiers had failed because the Tigers deployed suicide bombers against them. 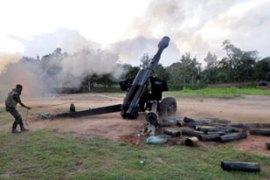