Speaking on Saturday at a fundraising event in Englewood, Colorado, Palin told supporters Obama “is someone who sees America, it seems, as being so imperfect that he’s palling around with terrorists who would target their own country.”

She was referring to William Ayers, a member of the radical 1960s group, the Weathermen, who supported Obama’s first run for public office in 1995. Members of the group had been accused of placing bombs at the Pentagon and the Capitol.

“Governor Palin’s comments, while offensive, are not surprising, given the McCain campaign’s statement this morning that they would be launching Swift boat-like attacks in hopes of deflecting attention from the nation’s economic ills,” Obama spokesman Hari Sevugan said.

Addressing a rally of 18,000 people next to Virginia’s naval shipbuilding yards, Obama noted that McCain proposed to give families a tax credit of $5,000 towards paying for rocketing health care costs.

“But like those ads for prescription drugs, you got to read the fine print to learn the rest of the story, to find out the side-effects,” Obama, who is proposing subsidies and tax breaks to bring in near-universal health care, said.

McCain insists his health care plan would generate more competition and drive down costs, and that Obama’s plan would deprive voters of their choice of doctor by creating a “vast new bureaucracy” run by the government. 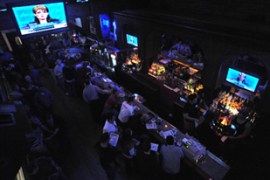