Al Jazeera’s Nadim Baba said on Sunday: “She has shifted position. Angela Merkel has almost admitted that she’s under pressure to do exactly what she was criticising other governments, mainly Ireland, for doing, which is guaranteeing the deposits of the entire nation.

“It’s a huge step for Germany. It could, in theory, represent an amount which totals over $750bn.”

Ireland has announced it is in recession and has already guaranteed bank deposits, as has Greece. With Germany following suit, other European countries are likely to do the same.

The $48bn HRE plan would have entailed the German government injecting $37bn, with a consortium of banks providing a “liquidity line”. However, HRE said on Saturday that the consortium had “now declined to provide the line”.

The property lender said it was in the process of “determining the consequences”  on various divisions and that it would seek other solutions.

The rescue bid was the biggest in German history and came after HRE became mired in the global financial turmoil through its inability to refinance debt.

The Welt am Sonntag newspaper reported on Sunday that the bailout would have to be reworked because the bank’s cash needs had been underestimated.

Deutsche Bank warned  that “by the end of the year, there will be a shortfall of up to 50 billion euros and even of 70 to 100 billion by the end of 2009,” the newspaper said.

Deutsche Bank issued the warning late on Friday during a telephone conference with representatives of the German banking and insurance sector, according to the report.

HRE shares had lost three-quarters of their value last Monday, and although they clawed back some ground over the week, on Friday they closed 44.4 per cent down on their level one week earlier.

Udo Steffens, from the Frankfurt School of Finance, told Al Jazeera: “Guaranteeing the savings of mainstream citizens is a positive sign that there will be no bank run or questioning that their private money in the bank is unsafe.”

Steffens said that there appeared to be attempts to harmonise national actions across the EU, but that without knowing the depth of the economic problems countries might face, some national actions should be taken.

At Saturday’s mini-summit with the leaders of France, Britain and Italy in Paris, Merkel managed to keep a continent-wide emergency bailout fund, suggested by France, off the table.

“Each country must take its responsibilities at a national level,” she said at a news conference with Gordon Brown, the British prime minister, Nicolas Sarkozy, the French president, and Silvio Berlusconi, the Italian prime minister.

Sarkozy insisted he had “never” raised the possibility of such a fund, but European officials in both Berlin and Paris confirmed that the idea had been mooted.

Merkel declined to comment on HRE’s problems, but Peer Steinbrueck, the finance minister, expressed regret “that German taxpayers will have to pay for the shenanigans of banks that set up shop in Dublin to escape German taxes”.

HRE’s problems had been caused, in part, by debts incurred by the Irish subsidy Depfa, which it bought in October 2007. 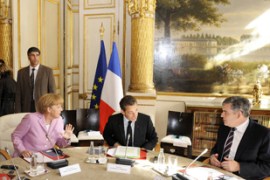