They primarily focused on whether governments across the European Union should show a unified approach and assist troubled banks.

Nicolas Sarkozy, the French president, hoped to persuade other leaders to agree to  a bailout plan similar to the one implemented in the US. However, Germany and the UK rejected the idea.

Sarkozy also said that the EU’s budget rules would have to be adapted to deal with the global financial crisis.

The rules require that nations using the euro currency keep their budget deficits below three per cent and overall public debt below 60 per cent of the gross domestic product.

Sarkozy suggested that the rules will be bent to help EU countries cope with the financial turmoil spreading from Wall Street. He said the rules will be applied in a way that reflects “the exceptional circumstances”.

The four leaders stressed the need for co-ordination and called for a rapid meeting of the Group of Eight industrialised powers.

Al Jazeera’s Nazanine Moshiri, reporting from Paris, described the atmosphere at the meeting as “sombre”.

“You could sense from the press conference as to how urgent the situation has become,” she said.

“France’s huge deficit issue is the main problem here. The country is technically in recession, and Sarkozy wanted a US-style bailout plan, but other EU states were not keen on the idea.”

Jad Shaaban, an assistant professor of economics at the American University of Beirut, told Al Jazeera that even Western models of free market economic are prone to potential failure, as reflected through the credit crisis.

“Institutions such as the World Bank and the IMF [International Monetary Fund] should reconsider their approach in advising developing states to restructure their economies based on the free-market model,” he said.

“In Africa for example, the trend has been to promote free market economies without building strong institutions, and this has greatly hindered development in African countries. Yes, I think they have lost a lot of credibility.”

Jose Manuel Barroso, the president of the European Commission, said the rules will be applied with “flexibility”.

The French president also proposed that the heads of any failed bank that needed to be rescued via government intervention should be punished.

He said: “In the case of a public support to a bank in distress, each member state present here has decided that those executives who failed will be sanctioned and the shareholders bear the weight of the intervention.”

Meanwhile, Angela Merkel, the German chancellor, said that European states must each take responsibility at a national level for the banking crisis, without harming other European states.

She said: “Each country must take its responsibilities at a national level.”

“It is important to act in a balanced way, and for countries not to cause harm to each other.”

The talks were held amid increasing concern that the US crisis on is amplifying a slowdown across Europe.

French plans for a $416bn emergency fund, which were leaked to the media earlier in the week, were dropped after objections from Britain and Germany.

Gordon Brown, the British prime minister, had said on Friday: “The suggestion that there is a fund about to be formed across Europe … there is no currency in that.”

Both nations were reluctant to commit their taxpayers’ money to a Europe-managed fund and instead advocate a case-by-case approach to rescuing financial institutions.

However, Merkel played down divisions, saying there was “a high degree of common ground” between Europe’s four largest economies.

Merkel said politicians must step in to find solutions and warned that “those who caused the damage must of course also make their contribution”.

Sarkozy said he agreed, and added that the crisis is a global problem that requires a global response.

“Europe must show its desire to present a solution. That will reassure everyone,” he said.

But a senior Sarkozy aide sought to dampen expectations, saying the European leaders were not “going to save the world”.

Dominique Strauss-Kahn, the head of the International Monetary Fund, who met  Sarkozy before the summit, said the crisis represented a “trial by fire” for the euro, Europe’s 10-year-old common currency – and would require a quick, co-ordinated response.

“We have to make sure Europe takes its responsibilities like the United States,” he said .

Banking shares have plunged in Europe amid fears that banks would be unable to find credit to cover their debts. 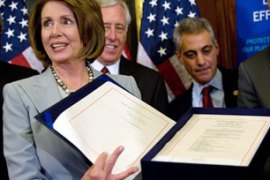 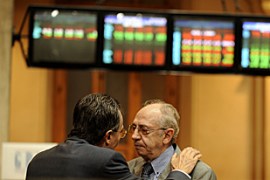